Working with the Eye Bank 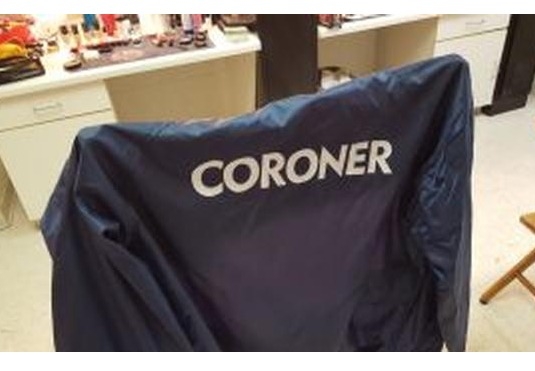 Under the law, the coroner may stop a donation from happening if he or she thinks the recovery of the donated tissue will interfere with determining a cause and manner of death. The law also requires eye banks and coroners to work cooperatively to maximize donations when possible.

The Cornea is a Living Tissue

Like an organ, corneas are alive and have a limited time past death to be preserved and kept alive. Other donated tissues — bone, skin, or heart valves — may be frozen, irradiated, or processed in any number of ways. Corneas can not and must quickly be kept viable in fluid with specific nutrients for the specialized cells that make the cornea function.

Time is the Worst Enemy

The two factors that most dramatically affect transplant rates are pre-autopsy release and recovery prior to moving the body from the hospital. Corneas have a limited life-span after cardiac death. Tear production stops at death and threatens the cornea’s viability. The possibility of transplanting the corneas may be jeopardized by waiting for an autopsy. While other tissues have up to 24 hours for recovery, corneas do not. The nationwide standard is to recover corneas within 8 hours from death, and that is the goal at the Rocky Mountain Lions Eye Bank. This is not to say that corneas cannot be recovered after 8 hours; but the longer the time between death and preservation, the less likely they are able to be transplanted.

For this reason, it is important for the eye bank and the coroner to discuss release options on every case and at all hours a death may occur. This is to maximize the possibility of donation and to minimize any damage to the corneas that long delays can cause.

To maximize the possibility of a successful corneal transplant, while ensuring the needs of your investigations are met, you should:

Evidence can be Preserved

In the same way a transplant surgeon will notice abnormalities during organ recovery, so will the eye bank recovery technician during a cornea recovery. After all, few people look at more eyes than an eye banker. Allowing us to check for abnormalities and collect vitreous fluid contributes to your investigation and preserves the chance to help another overcome blindness. We can also testify in court as needed.

For the period of July 1, 2018, to December 31, 2018, a total of 193 eye donation cases recovered under a coroner's jurisdiction were individually reviewed and the case notes read to determine the sequence of events. We sought to answer the following questions for each case:
1.    Was the coroner release before or after the autopsy?
2.    What was the time between death and preservation?
3.    Where did the recovery take place?
4.    Was it a shared case with Donor Alliance?
5.    Were the corneas transplanted?
6.    What was the transplant rate?
7.    Were there any complicating factors (difficulty reaching family, delays for transport, etc.)?

•    The transplant rate for all coroner cases is significantly higher than in other cases. This is due to the fact that many deaths under a coroner's jurisdiction happen unexpectedly and the donor was relatively healthy prior to death. 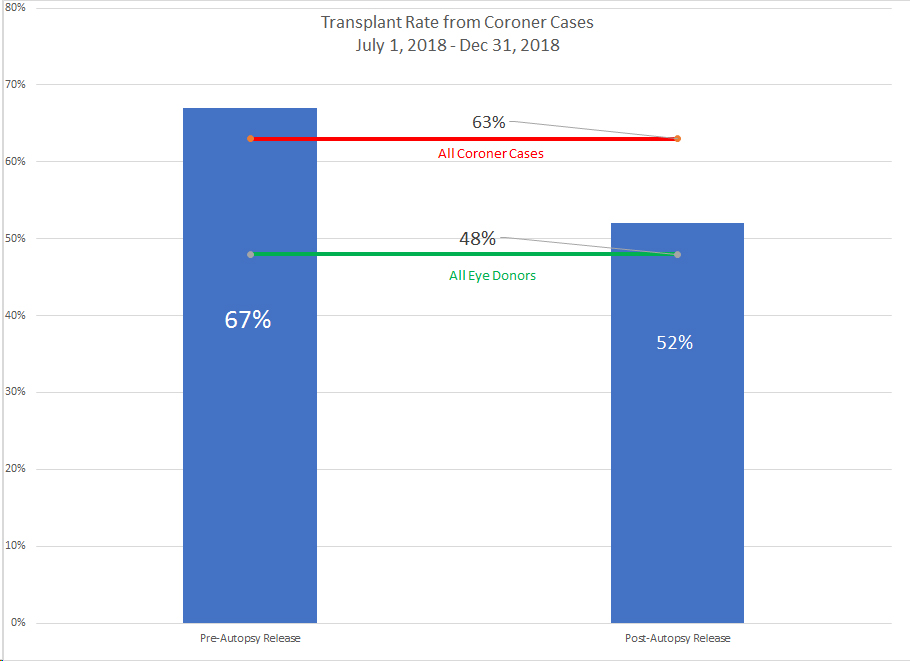 The time between death and preservation of the tissue is a critical part of corneal viability. Lower times generally lead to higher transplant rates.

For the purpose of the study, cases that had a complication were categorized apart from the other cases. For this study, a case was considered "complicated" if it had one or more of the following issues:
•    The next-of-kin identification or notification was delayed.
•    The donor was not immediately positively identified.
•    The body was moved to the Donor Alliance Recovery Center.
•    The body was moved to the coroner’s office, and the eye bank could not have access.
•    There were jurisdictional questions that had to be ironed out.
•    Any other extraneous factors that unexpectedly delayed the coroner from making decisions.

Conclusions:
Study results clearly indicate the following:
1.    As a group, cases under the jurisdiction of the coroner have a higher transplant rate (68% vs 48%). Much of this is attributed to the fact that these deaths are often younger and sudden or unexpected. They lack the often-long disease process found in many hospital deaths. Even though they have longer death-to-preservation times on average, they are healthier corneas to begin with because, in most cases, the donors were alive and blinking, ensuring a constant tear film right to the moment of death.
2.    Pre-autopsy released corneas have the lowest time between death-to-preservation and, subsequently, a higher transplant rate. Pre-autopsy released corneas recovered at the Donor Alliance Recovery Center have significantly longer death-to-preservation times comparable to post-autopsy recovered corneas.
3.    Even in cases where there are complications, a pre-autopsy release is still the next lowest death-to-preservation time. Transplant rates for these corneas are the second highest, as a group.
4.    Across the board, post-autopsy recoveries have the same basic death-to-preservation time, whether complicated or not.
5.   The National Association of Medical Examiners advocate the release of transplantable tissues in all cases. In our service area, there are a few coroners who release corneal tissues prior to an autopsy on every case. There are other national examples of coroners who have taken steps to maximize the number of transplantable corneas.

1.  About the Rocky Mountain Lions Eye Bank
2. What is corneal blindness?
3. How does the tissue donation process work?
4. How does the eye bank work with coroners?
5. Donor family and transplant recipient testimonials
6. Quiz